In March 2003 we asked our members for donations towards the provision of bat boxes in the Abbey Fields which proved very successful. They were made for us by the Warwickshire Bat Group and were erected by their volunteers and Warwick District Council Arboricultural team. 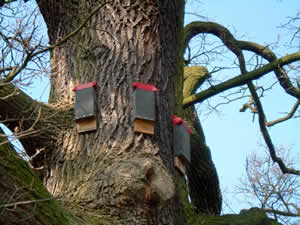 In September 2004, Paul Elliot, John Waller and Jackie Underhill from the Warwickshire Bat Group inspected the bat boxes. Each box was marked with a number for future identification and then checked for occupancy. Because the young bats had now gone from their parents’ roosts to find their own favourite place, Paul and the others were looking more for signs that bats had been in residence rather than the bats themselves. They found bat droppings in six of the boxes, and one of them, on a large oak to the north of the lake, actually contained a bat, which was thought to be a soprano pipistrelle. Paul and his crew were satisfied with their findings as it can take years for bats to get used to boxes that have been newly installed.

Since then we have gradually replaced most of the original boxes as they deteriorated with woodcrete boxes which are longer lasting.