In October 2003 we started a project to buy some nesting boxes for birds to replace the existing ones that have deteriorated. This proved very successful with many members either sponsoring a complete box or making a donation towards one. We were able to buy 22 woodcrete bird boxes and 2 wooden boxes suitable for tawny owls. These were erected on our behalf by Warwick District Council and those who sponsored the boxes or made donations were issued with a map showing the location of the boxes. A copy of this map can be seen on the notice board at the Swimming Pool. 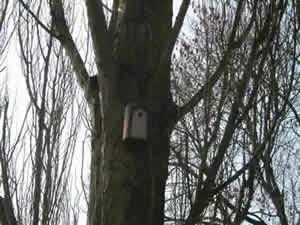 In June 2004 we observed activity around these boxes and it was found that 9 out of the 18 tit boxes were occupied, which is a good result for the first season. It is obviously very difficult to observe the open fronted boxes which are generally obscured in holly bushes so we are not sure whether any of the 4 erected were used this year. Nor did we see any activity at either of the owl boxes, but we are hopeful for this year as owls have already been heard in this area.

In the Autumn of 2006 we purchased a further 10 birdboxes and the WDC have put these up in time for Spring 2008 as well as cleaning out the existing boxes, most of which had evidence of use. Please keep your eyes open to see which of the boxes are used this year.

In the Autumn of 2008 we again replaced birdboxes and the WDC cleaned out and checked others and found that 98% of them had been used.