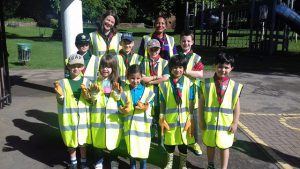 In 2017 we started litter picking in April. We had something like 84 volunteers plus, on one occasion, 12 very enthusiastic Beavers. Well done the Beavers.
For most of the litter picks the weather was kind to our volunteers and we did not have to abandon a single Saturday. We collected approximately 34 bags of rubbish during this time. Two fewer than last  year. Let’s hope that this reduction keeps going.

Perhaps the most interesting find was a sharp knife. It was found on the edge of Finham Brook next to the swimming baths. It was handed over to the police!! However a growing concern was the amount of broken glass often found around the car park area and by the pavilion. Obviously this is dangerous both to the public and our valiant litter pickers.

Another Year’s Litter Picking well done. Thank you every one of the FOAF Litter pickers for your great efforts which are much appreciated by everyone.