We hold a Moth Evening each year around August.  Read below a report on a previous year’s Moth Evening: 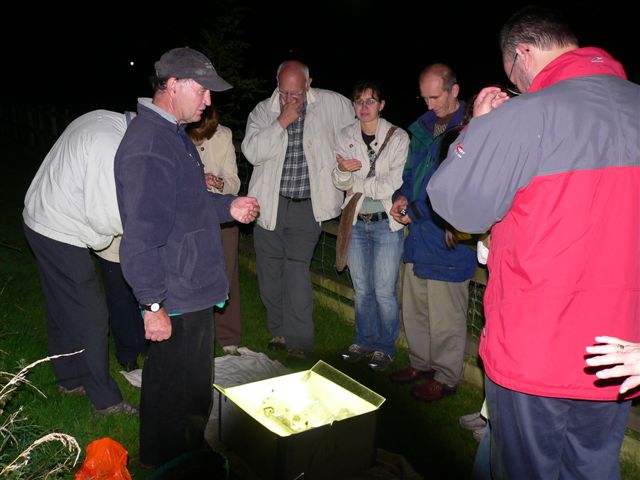 The evening was warm and it was not completely dark as David Brown, the County Moth Recorder set up two moth traps near to Finham Brook in Abbey Fields. After a slow start the moths began to arrive as darkness descended. The first was a ‘flame shoulder’, a common and widespread insect in Warwickshire. It is so called as it has a bright straw-coloured band running along the leading edge of its forewings. The Underwings then put in an appearance, first the ‘Lesser Broad-Bordered Yellow Underwing’, then the ‘Large Yellow Underwing’, and finally the ‘Copper Underwing’. All these moths when disturbed, briefly display bright contrasting colours on their hindwings as a defence mechanism to startle their predators.

Several ‘Brimstone’ moths were seen in the traps, smaller than the ‘Yellow Brimstone’ butterfly, but still very colourful. The tiny ‘Straw Dot’ moth hid up one of the corners of the trap, as the name implies, it is straw coloured with a brown dot on each wing. There are several moths which carry the name carpet, e.g. ‘Water Carpet’, ‘Green Carpet’ and ‘Sandy Carpet’ and a couple of ‘Common Carpets’ came in within the first hour. Other moths seen were ‘Common Rustic’, ‘Square Spot Rustic’ and ‘Dark Arches’.

Our thanks once again to David Brown for his continued support and advice on moths.