The evening was cool, with high clouds and a hint of damp in the air. But, despite the weather, some 20 people had gathered to find out more about Moths. David Brown, the Warwickshire Moth Conservator, was introduced to the group and he was to lead the event. Our first task, he explained, would be to assist him to move his moth traps down to the stream – Finham Brook – where the trees along the bank should provide cover and shelter from any breeze that might arise. Once he had found a good location, under poplar trees, he set up a small generator and two Skinner moth traps,  named after the inventor Each looked like a white box, without a top or bottom and which was laid on a white sheet. An 80 watt mercury lamp was installed in each. Several cardboard egg boxes were carefully leaned up against the walls of the boxes and in one of the traps a pair of Perspex panes were added and finally a small Pyrex bowl was laid over the mercury bulbs to protect them against rain as cold rain could easily cause the bulbs to shatter if. We were advised to shield our eyes, if we looked towards them, as the mercury lights would be very bright once they had warmed up. When they were switched on they were a pinkish colour but soon became bright white. We then stood back and waited. 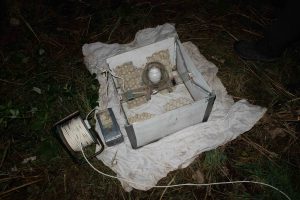 While we waited David engaged us with a talk about British Moths. He told us that there are about 2300 species of moths in the UK. These are split into two groups – Macro Lepidoptera (about 800 species), which are the larger moths and Micro Lepidoptera (about 1500 species) which are smaller moths, some are no bigger than a pin head! He explained that while no one knows exactly why moths are attracted to lights, the no.1 theory is that they use the moon to navigate by and they become confused by bright lights. This results in them being attracted to lights and suggests why they flutter around them. Quite a number of moths do not feed as adults and those that do chiefly take nectar from flowers. In autumn and winter moths feed on tree sap and leaf litter humus. However, moth caterpillars generally eat vegetation and only three eat clothing (made of natural fibres) and, unlike moths, some caterpillars can bite. Moths are capable of flying 100s or even 1000s of miles. This is a one way trip and they do this to avoid overcrowding. Generally moths are moving northwards as a result of climate change.

Because of the cool weather, the moth traps attracted only five moths and a shield bug:
Grass Moth
Six Striped Rustic Moth
Setaceous Hebrew Character Moth
Orange Swift Moth
Flame Shoulder Moth
and 1 Shield Bug, which is not a moth.

Despite the lack of moths it was a very interesting evening. Our thanks once again to David Brown for his continued support and advice on moth