We are delighted to let you know that owls are regularly being heard in Abbey Fields. We believe these to be tawny owls, which are almost certainly resident in Abbey Fields.

Tawny owls are rarely seen in daylight but their haunting call hoo hoo-hoooo hoo is probably familiar to many of us. They start to call at dusk but wait until the night is properly dark to begin hunting. They feed on voles, mice, rats, frogs, beetles and earthworms and have even been known to take small birds while they are roosting at night. 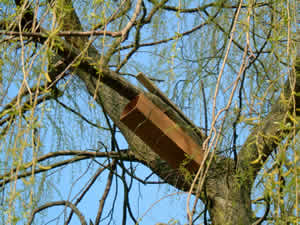 Tawny owls can live to be ten years old. They nest in holes in old trees or abandoned nests of crows or magpies, but will also use nest boxes: we hope that they may be using the nest boxes that we erected last year. They lay 2-5 eggs and raise one brood between April and June.

If you are lucky enough to see one at night it will appear as a bulky silhouette with a large head. Its flight is strong, heavy and undulating with deep regular wingbeats and short glides.

The British Trust for Ornithology is setting up a survey of Tawny Owls to commence in the autumn. The Trust is concerned that tawny owl numbers may have fallen by a third since 1994, which suggests a dramatic change to the population. The survey is being designed to find out the best ways of accurately recording the owl population. If you would like to know more about the owl survey or the work of the BTO please look at their website www.bto.org or telephone them on 01842 750050.

We are wondering whether Little Owls may also be resident in Abbey Fields. The little owl is the smallest British owl, only 9″ long. It is sometimes seen perching in the daylight but is more commonly noticed at dusk when it may be spotted as a round shape perched on the top of a post or branch. Sometimes they look just like a tennis ball on top of a post! Little owls have a distinctive bounding flight, not unlike that of a woodpecker. Their call is quite different from the tawny owl, being a loud plaintive call like keeooo or a short kip, kip, kip. The little owl nests in long narrow holes in banks, trees or buildings. It lays 205 eggs and rears one brood between May and July. They feed on small rodents and large insects and will also take small birds and earthworms. The population of little owls is known to be declining but typically the owl might be found in farmland and parkland with old trees or buildings.

Please let us know if you see or hear a bird that you think may be a Little Owl.