On 20th May 2006 we took part in Reed Planting on the High Street side of the Lake. Warwick District Council had prepared the site by fencing off and building up the edge in readiness for planting. They had also laid another feeding stage in the hope that it will prevent the erosion of the banks either side. 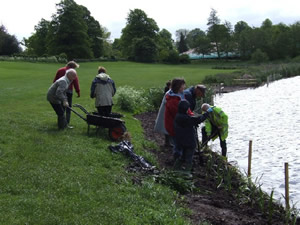 We were very pleased to be joined by new volunteers George, Mick, Linda and her son Matthew, who came forward after the article on the stream clearing appeared in the Kenilworth Weekly News. It was lovely to see our former Committee member Pam Vaughan and new member Joan who also braved the elements. We were also grateful for the help of Dave from Glendale and Jim Strang, Glendale’s Contract Manager.

Approximately 500 plants were transplanted from Luzley Brook and the pebble end of the Lake and we began by lining the edge of the prepared area with Sedges (Carex Riparia), followed by two or three rows of Bur reeds (Sparganium Erectum). We were told that these should grow quite rapidly and will soon thicken up.

Thankfully we had completed the major part of the work before the heavens opened and we all had a good soaking, but this did not deter us from completing the job. Our thanks to all involved.