Towards the end of March/early April 2018 during a spring storm one of the willow trees, growing alongside Finham Brook, collapsed and fell across the footpath and into Abbey Fields lake. Subsequently, a section of the trunk had been cut away as a emergency task so that the footpath remained passable until the ground conditions were favourable enough for the WCC Forestry team to complete the removal.

WCC Forestry Section team of 3 arrived to remove the willow that had fallen over across the footpath alongside Abbey Fields Lake. The three WCC Forestry Section members, Alex, Dave and Matt, examined the site to confirm the job viability and then moved in the equipment they would be using.

This comprised an Isuzu truck with winch, and a variety of straps and pulleys, chainsaws and safety equipment, a Vermeer s725tx tracked skid steer vehicle, which can for a variety of projects including tree removal, as on this occasion, and 750 shredder.  They set up a perimeter which was marked with safety tape, warning signs and barriers so that members of the public would not enter the area by mistake and could be kept safe from harm. The team completed a health and safety review and looked at how the job should be executed. Once everyone was clear as to what had to be done the hard work started. 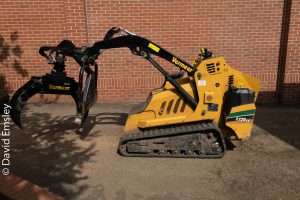 A set of straps and pulleys was set up in a tree on the other side of the brook to allow maximum purchase for the winch on the Isuzu. A three foot section of trunk was cut from the tree and the Vermeer moved the piece to the place by the leisure centre where the shredder was stationed. Note this was far too big to be shredded and would be taken away later.  Meanwhile, the next step was considered and an attempt was made to try to pull the tree out of the water. Unfortunately the combination of winch and pulleys was unable to gain sufficient purchase to move the tree which was embedded in the silt at the bottom of the lake. More equipment was sent for and while this was arriving, the chain saws were used to remove some of the branches accessible from dry land and which were taken up to be shredded. The shredder is quite powerful and was able to ‘consume’ branches up to 6 to 8 inches in diameter easily!  At about 12:30 a further member of the WCC FS team arrived with more straps and pulleys.  This allowed the team to set up a three to one purchase for the winch.  Once again they were thwarted as the combination of the weight of the tree, the friction across the ground and the embedding in the silt proved too much for the winch. So a decision was taken to bring in a tractor with a winch with much greater pulling power the next day.  During the afternoon, using the winch and chainsaws, significant progress was made in stripping the tree of all but the largest, and most inaccessible, branches which were also affecting the stability of the tree. At about 5.00 p.m. it was decided that no further work could be completed until the morrow.

During the exercise the local wildlife seemed to carry on with their normal activities and appear oblivious to the tree removal.  The mallards alternated between calm cruising about, sleeping and squabbling, whilst the common carp seemed much more interested in feeding, especially when the silt was stirred up. 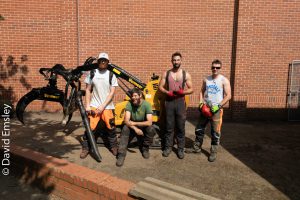 End of the day for the day 1 team 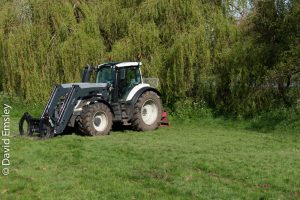 At about 9:00 a.m. The heavier tractor arrived, a Valtra tractor with Quicke Q7b low loader installed. This time the WCC FS team was made up of Kieran, Aiden, Mat (from yesterday) and Max.  After resetting the safety perimeter in order to ensure the safety of the general public and Kieran had reviewed the task, work was started.  The tractor was sited across the brook and a pulley system was set up, as yesterday, to allow the heavier equipment to pull the tree from the lake.

Using the winch on the tractor, the tree was pulled up onto the path and a three to four foot section of the trunk was cut off using the chainsaw. While the section of trunk was being moved away by the Vermeer, the tree was winched again so that a further section could be cut off. After a third such cut most of the heavy work had been completed, leaving a lot of smaller branches to be cut up and shredded.  Which activity was completed as quickly as possible so that the path could be reopened to the public.

As yesterday, the adult mallards and several hybrid ducks were busy cruising around or squabbling and the ducklings seemed to ignore the fact that their previous resting place had mostly disappeared and seemed quite happy to hop on the bank and grub for food in the puddles at the edge of the lake.  The fish kept on splashing in the water and appeared quite happy. 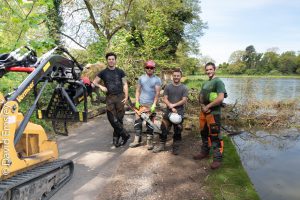 End of day for day 2 team

All in all an excellent piece of work completed by WCC Forestry Section staff, who throughout the two days remained cheerful and polite and worked hard to complete the task as soon as possible.

All images by David Emsley