Note: This is now a historical document. You can see more on the work performed here.

We were first informed of the WDC’s plans for the car park  when a member sent us the attached papers for the WDC Executive meeting on12th October 2011.

Following this on Monday, 31st October 2011 there was meeting with WDC officers and the Portfolio Holder for Neighbourhood Services, the 3 Ward councillors for Abbey ward, a representative from WCC Highways/ Traffic, and 3 representatives from St Nicholas Church including the vicar.

We were informed that there was general agreement that the car park is unsatisfactory now, that the surface should be better;  and the drainage is a serious problem and the re- surfacing gives an ideal opportunity to sort it out thoroughly. English Heritage has been very helpful and has given consent to the proposals.

There was general agreement that –

Following this FOAF got a second opinion on the trees that were to be removed as they included this beautiful Red Oak: 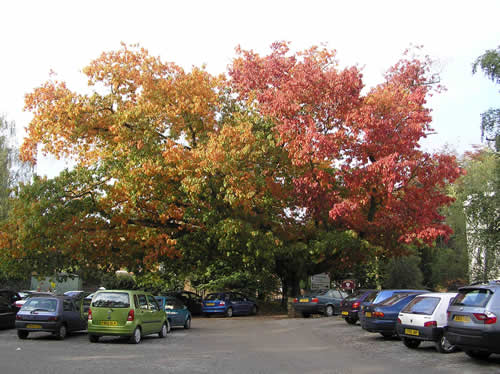 Unfortunately it was confirmed that the trees were unsafe and would have to be removed.

Please note – the Planning Application for the work to lay out and create the new parking arrangements, has now been submitted and published.

The details are attached herewith

or you can view a hard copy of these documents at the One-Stop shop at the Library.

The case officer in the planning department is Penny Butler.

Any comments should be sent in to her or to the Planning Department at WDC, Riverside House, Milverton Hill , Leamington, CV32  5QH, by 20th February.

We are informed that the principle of charging is not strictly part of the planning process, so we should be sending comments relating to the physical changes, the effect of new lighting, the impact on the neighbourhood, possible change to local character and Conservation Area etc etc.

The latest on this is the planning application has been declared invalid until the bat report and tree report have been submitted. These two reports have now been completed although we believe that until the problem of drainage from the site is solved it will not be put before the Planning Committee. We will let you know when this appears on the agenda.

For all the latest reports see: