The Abbey of St Mary was founded around 1119 for Augustinian Canons and was closed by King Henry VIII’s dissolution in 1538. By 1600, most of its buildings had been dismantled, although some parts survive today both above and below ground. 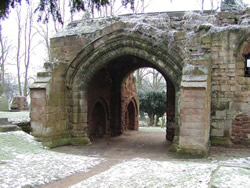 Whilst the Abbey Fields and Park are a source of pride today, at times in the 19th Century they were under threat. In 1835 there was a proposal to lay a turnpike from the south edge, near the site of the War Memorial to the junction of New Street and Bridge Street. This would have continued through the gardens on the north side of New Street and finished near the junction of New Street and Manor Road. A further threat came when the Local Board prepared plans in 1886 for housing plots along the lengths of Forrest Road on the south edge of the Fields, the High Street along the north edge and at the corner of Castle Road, where some development subsequently took place. 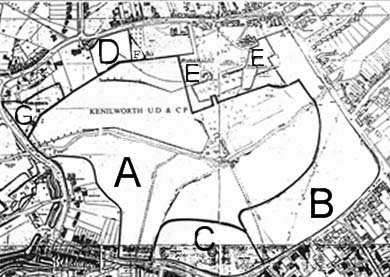 Abbey Fields belong to the residents of Kenilworth for use only as recreation and pleasure purposes and are maintained by Warwick District Council under the control of English Heritage as a scheduled ancient monument. No building is permitted; the whole area of 27 Hectares (including the churchyard), contains some 8 sections, all gifted by separate donors. All documentation is held by W.D.C. Guide to map:

A: Acquired by Kenilworth Local Board, 1884, for £6,000 from the Rt. Hon. Edward Hyde, Earl of Clarendon, the Rt. Hon. Frederick Arthur Stanley, and the Rt. Hon. Edward, Earl of Latham. Conveyed with covenant that said pieces of land may forever hereinafter be used as public walks or pleasure grounds, under the Recreational Grounds Act 1859.
B: Given in 1884 to William Evans and Joseph Roberts in their capacity as Churchwardens of the Parish of Kenilworth, as trustees, by Henry Street, George Marshall Turner and others, to be held and managed by Kenilworth Local Board under same conditions as above. the Church Wardens are still consultants regarding this area.
C: A gift by Gertrude Emily Evans in 1917 subject to the land being held as public ground for the purpose of the Recreational Grounds Act 1859.
D: Also a gift from Gertrude Emily Evans in 1938 to Kenilworth Urban Council and conveyed by covenant under Local Government Act 1933 and the Mortmain and Charitable Uses Act 1892 – “Land that should be forever preserved and kept as nearly as it may be in its natural condition as open grass land”.
E: Acquired by Kenilworth Local Board in 1889 for £400 from Joseph Holland Burberry, William Evans, John Bagshaw and George Marshall Turner. Conveyed with Covenant “may forever hearafter be used as public walks and pleasure grounds – not to be sold or leased for any other purpose”.
F: Given by Coun H. W. and Mrs. Whiteman, owners of the adjoining Abbotsfield, to Kenilworth Urban Council in 1974, subject to the same conditions as E.
G: This area was purchased by Warwick District Council in 1974 as a public open space. 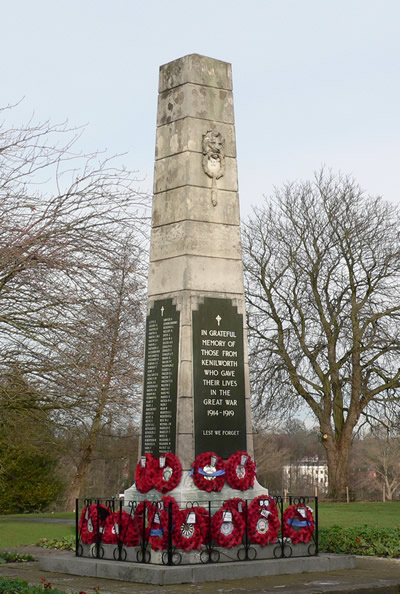 The War Memorial was unveiled on Sunday, 26th February 1922, dedicated to those who died in the Great War (1914-1919). Subsequently it was dedicated to soldiers killed in World War II (1939-1945) and in Korea (1952). Close by is a specimen of the Indian Bean Tree (Catalpa bignonoides), that was badly damaged by high winds in November 2002. The path that leads from here to Rosemary Hill follows the line of a prehistoric straight track. It is lined with European Lime trees. A further path leads from the Memorial to the centre of the fields, crossing the Finham Brook via an iron bridge, which used to possess a gate that divided the bridge. To the west of the iron bridge, traces of the abutments of the mediaeval Packsaddle bridge, which carried traffic across the brook to the Abbey, can still be seen. It was destroyed in a severe flood in 1673. Nearby are the Swimming Baths (which opened in 1896 using water from Finham Brook) with its indoor and open-air pools, a café and five tennis courts. Until some point in the 21st century, it had a bowling green on the site of part of the enclosed children’s play area,  and a golf putting course.

The Alder-lined Finham Brook runs West to East entering the park from the Ford by Kenilworth Castle. A flood in November 1883 caused the Ford to rise to over 3m and in December 1900 heavy rains caused the brook to become a swollen river, so that 30-40m of each side of the Ford was under muddy water, and the Abbey Fields were flooded. The brook leaves the fields by flowing under the grade II listed Town Pool Bridge. Some of the levels of exceptional floods are recorded on the west side of this bridge.

Luzley Brook, lined with weeping willows, enters the fields under Castle Road and joins Finham Brook close to the lake’s waterfowl feeding boards at the rear of the swimming baths. The lake was created on the site of the old Abbey pool by Warwick District Council in the 1990s. Upstream of this junction is an earthworks. A 3m high mound surrounded by mature oak and beech trees. It has been described variously as a barrow, a spoil heap, a signal tower and as a burial site for soldiers from the siege of Kenilworth Castle in 1266. 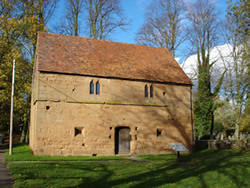 A path leads from the swimming baths via the children’s playground to the 14th century sandstone Barn, now used by the Kenilworth History and Archaeology Society as a local history museum. It is open on Sundays and Bank Holidays in summer, with opening times posted on the door. Downstairs it also houses the Abbey Interpretation Project. Its walls are peppered with shot marks, perhaps from skirmishes in the Civil War in 1642. The path leads on, via part of the south wall of the Abbey Chapter House, to the Tantara Archway (1361-75) of the Abbey Gatehouse. There used to be a ‘Clapper Gate’ or ‘Tumbledown Stile’ in its small archway. It now resides in the Barn.

To the east of this is the churchyard of St. Nicholas’ Parish Church, well endowed with evergreens such as Yews and Cypress. A number of brass plaques in the churchyard identify the Abbey Ruins. The Church is built from sandstone quarried locally and has a Norman archway. The European Lime Avenue from the Church to Bridge Street was planted c. 1910 and presented by Mr. Keyes of Park Hill in memory of his late wife. From the Bridge Street end of this Avenue runs a path back to the centre of the Fields, past a disused water fountain, and from the Church end runs a path to the centre that passes a relic from the South wall of the Chapter House of the Abbey. During excavations, tombs of the Abbey Founders were found here. There is a reconstruction in the Barn.

More information on the History of the Abbey of St. Mary’s may be found at the Kenilworth Historical and Archaeology Society website.

Information and maps of the areas of Abbey Fields gifted to residents of Kenilworth were compiled by Kenilworth Society in 1965 from records held in the County Record Office.