Every spring fish are removed from the Lake to reduce the numbers as there is no other means of escape for them. This is done with the help of Leamington Angling Association assisted by students from Warwickshire College (Moreton Morrell).

During the week commencing 30 January 2012 10 fish were caught to be health checked before the 2012 fish removal began.

A good time was had by all at Abbey Fields. About 15 decent sized carp (biggest 17 lbs) and a lot of rudd and small commons and mirrors (the carp are breeding). Some rudd went to Jubilee Pools and the rest to Ryton Pool at the country park. I’m sure I can still smell the mud on my hands! We need to think of a solution for the brown goldfish of which there are loads.

All of the public were very supportive of the “rescue” and all of the Leamington Angling work party and students from Warwickshire College (Moreton Morrell) were briefed on the story to tell anyone who enquired. Many thanks for the fish. 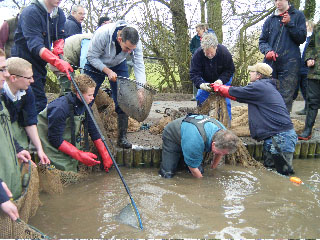