Early in 2003 we asked Warwick District Council to leave a hedge uncut as part of our project to enhance the value of Abbey Fields for wildlife. The chosen hedge, which runs from the swimming pool bridge uphill to the war memorial, contains a number of species including holly, elder and hawthorn. The hedge will now be able to produce blossoms in spring and berries in autumn which will increase the availability of food for insects, butterflies, bees and birds. It will also increase the number of potential nesting sites for birds and become more interesting for us human visitors.

In the Autumn of 2003 we managed to re-establish sections of the ancient hedgerow which runs from Forrest Road towards the Swimming pool. With the support of Jon Holmes from Warwick District Council and Dave from Glendale and an army of volunteers we replanted the gaps in the old hedge with native species: predominantly hawthorn, but also some oak, dog rose, privet and blackthorn, with the addition of a couple of small oaks which will eventually form substantial trees. The restoration of this hedge, which will outlive all those who helped to plant it, will enhance the environment for wildlife and for human visitors. Hedges provide shelter, food and nest sites for a variety of fauna and flora and add interest to the view. The following week we returned to add a mulch of bark chippings to the hedge which helped to keep the moisture in the ground from evaporating and also suppress the weeds from smothering the new saplings. A fence was constructed to protect the young hedge. The Friends of Abbey Fields made a contribution of £100 towards the cost of the saplings. 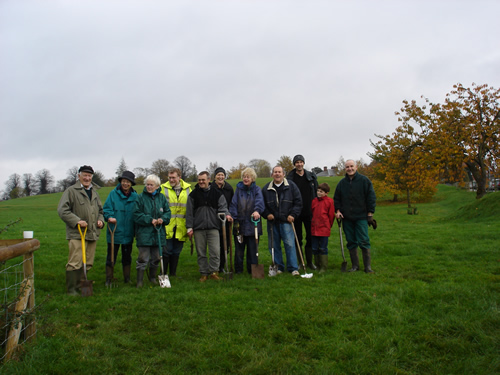 In the Autumn of 2004, again under the watchful eye of Jon Holmes of the WDC, the Friends reinstated the hedge which runs along the border of Abbey Fields by Ford Cottage and alongside the pony paddock. Dead and decaying hedge plants had already been removed by WDC and we provided a contribution of £100 towards the new saplings. We planted the gaps in the hedge with hawthorn interspersed with hazel, wild dogwood, blackthorn, dog rose, spindle, field maple, and guelder rose. In all we planted 575 saplings – a fantastic achievement. This time the weather was much kinder and caps and jackets were soon discarded; hard work but well worth it! 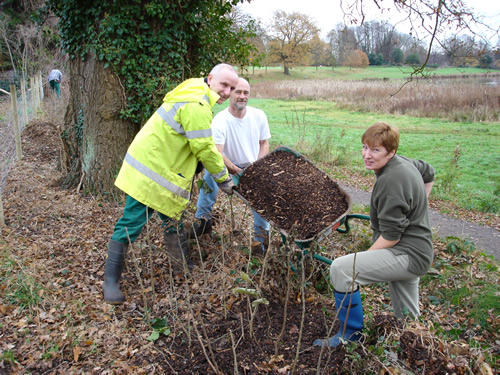 In the Autumn of 2006 we once again assisted the WDC to reistate a hedge – this time the one running alongside the pathway from the Memorial to the Swimming Pool bridge.We had a good turnout of volunteers which meant that the work was completed in record time. Two gaps in the existing hedgerow were re-planted with “whips” and heavily mulched to contain moisture. Regrettably six of the ten holly bushes that were included as “spot planting” were seen by somebody else who stole them within a week either for re-sale or for their own hedge. This was a particularly annoying theft in view of the efforts made in providing and planting them. The Friends of Abbey Fields made a contribution of £100 towards the cost of the “whips” to Warwick District Council who supervised the plantings. Our thanks to all who helped, the results may be somewhat slow to realise but will be appreciated in due course. 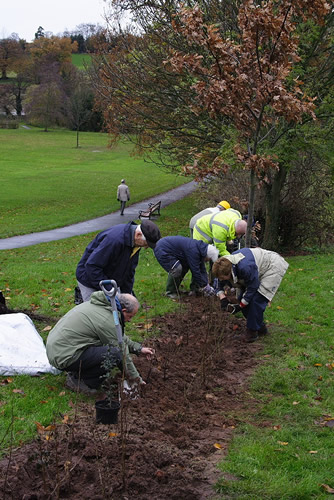 November 2007 saw us once again assisting the WDC to complete the restoration of the upper part of the hedge from the Memorial pathway. The existing hedge was of very poor quality, mainly elder, and this had been cut down to ground level and removed earlier by the contractors. Under the capable spervision of Jon Holmes we set about removing the ivy and other ground cover from around the remaining stumps. The ground was they cleared to a distance of about two feet on either side of the stumps. It was interesting to see what came out of the hedgerow as it was being cleared, nothing of any archaeological worth (honest, we did not dig down that far!) but more; than the expected beer can or bottle. The following Saturday saw the “gang” manfully digging holes for the new hedging – this was not at all easy as the existing roots had first to be removed. However all went well and in good spirits and before too long the final mulch had been applied and the area made respectable again. We made a £1,000 contribution towards this work.

Again in November 2008 we restored gaps in the hedgerow that we re-established in 2003. We were delighted to also arrange for Emmerson Press to plant an oak tree along this hedgerow as part of their environmental scheme. Again we made a £1,000 contribution towards this work.