A total of 17 helpers turned up for our monthly litter pick in Abbey Fields, on Saturday 05 June and a worthwhile amount of litter was collected, although several commented that there was not as much litter as would normally be expected after a half term holiday week. Well done to Kenilworth residents for looking after their litter more carefully. Several pickers took advantage of the new coffee outlet after their hard work – much appreciated!
Please continue to take your litter home or put in in the bins dotted around Abby Fields and remember that whilst paper might be bio-degradable, it does take days/weeks even months to do so, especially tougher products such as baby wipes and had wipes etc.
We would also like to thank the majority of dog owners and dog walkers for helping to keep Abbey Fields clean and tidy. But…………. as you will not be surprised to hear, we were disappointed to find that there are some irresponsible dog owners/walkers who still seem to believe that Dog Poo Bag Fairies will come and remove bags that those owners are too lazy to dispose of properly. Hiding the bags at the foot of tree in the children’s play areas or leaving them wedged between the slats on the benches in Abbey Fields is not a good idea. As we have said before If you have gone to the effort of bagging it…dispose of it in the bins provided! Or take it home to dispose of.

WE would like to thank all those who joined our litter pick on 1st May. It isn’t the most glamourous of jobs…but it really does make a difference. This time we managed to collect 18 bags of litter – Well done all.

Many thanks to those who so freely gave up their time to help with the final litter pick of the year. We managed to collect about 14 bags of litter – including a frying pan and a metal storage box filled with odds and ends that might be found in a DIY enthusiasts garage.  Many thanks also to Richard Gillard who has taken on the task of co-ordinating the Litter picks.

It is a constant surprise – and disappointment – that the litter pickers are regularly faced with having to remove rubbish that could so easily be disposed of in the bins provided. This time, and not for the first time,  we had to clear away bags of household rubbish that had been left by unknown persons too lazy to take them to the nearest litter bin or, better still, to the tip. Oddly much of this rubbish had been left in large bags from another county! 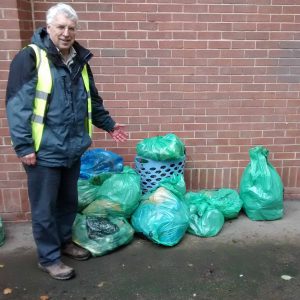 Another successful Litter pick. We had 8 volunteers who collected 11 bags of litter.  Our thanks are offered to those who so generously gave up an hour of their time to help with this task. The next one will be on 06 October – starting at 09:30 bay the swimming pool café.

Once again our thanks to those who turned up to help with this task.

Another successful Litter pick. We managed to collect about 7 bags of litter.

Our thanks to those who turned up to help with this task. 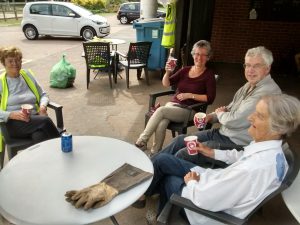 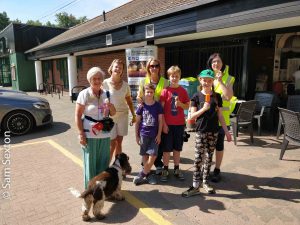 Yet another successful Litter Pick. This time we had 7 litter pickers who managed to collect six bags of litter. Once again, we thank them for their enthusiasm and their help which goes a long way to ensuring that Abbey Fields remains a pleasant environment for everyone to enjoy. We look forward to seeing you all at the next Litter Pick on August 04.

Yet another successful Litter Pick.  Although the number of pickers was down we still managed to collect some six or seven bags of litter.  We look forward to seeing you all at the next Litter Pick on July 07 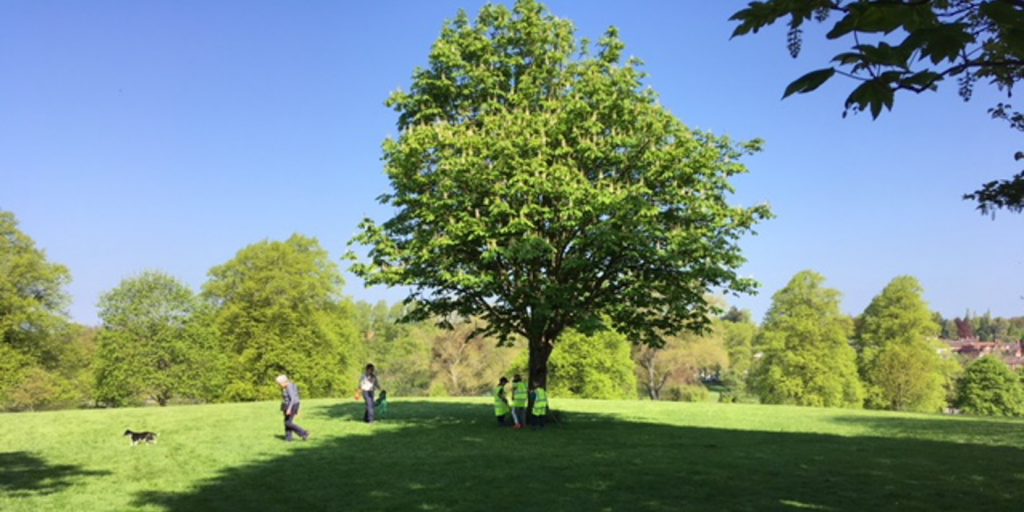 Searching for litter in Abbey Fields

This time we had a magnificent 30 persons helping with the Litter Pick which was led by Joanna Illingworth.  Included among the litter pickers were a number of Beavers in the care of Jo Cox.  This number of litter pickers is a record.

The litter pickers managed to collect four full bags of litter. This was because there was not much litter around, which is always a good thing.  So a good job was done to make the environment of Abbey Fields look even better.

Our thanks go to Joanna Illingworth, The Beavers, Jo Cox and all the others who gave their time to assisting with this litter Pick.  Well done everyone.

Once again we were encouraged by the number of people who were prepared to give up their time, on a damp Saturday morning this April, to help keep Abbey Fields litter free. The volunteers included a Girl Guide who is working towards her Baden Powell Award. She and her mother were most enthusiastic. They were early starters and late finishers – almost to the extent of our co-ordinator thinking about having to send out a search party to find them at the end of the morning. One of the volunteers brought along her Cocker Spaniel, Bella, who really enjoyed herself whilst her owner was busy collecting litter. As well as the usual collection of paper, cans, bottles. etc. we managed to collect some swimming pool toys, a large sheet of plastic and a large cardboard box.

Congratulations and thanks go out to the 12 volunteers (and our co-ordinator, Sam Sexton) who between them managed to fill 13 bags with rubbish. Several volunteers commented that they could have collected more but they had either filled their bag or run out of time.

Some of our April Litter Pickers with collected rubbish

See here for a summary of our 2017 Litter Picks