On Saturday, 6th May 2008 Jon Holmes (WDC), Dave Partridge (Glendale) and committee members formed a small working party to clear the brooks of accumulated debris. Older members will remember a time when the Luzley ran clear and fast, but the water table in Warwickshire has fallen, resulting in slow flow. This in turn allows silting, and subsequent colonisation by the plants of the banks, exacerbating the slow flow. Couple this with winter branch fall and detritus from the Fields, and the result is a clogged foul-smelling stream. Our job was to clear as much as we could to get the water running freely again, but this is not simple, for, unlike the Finham, the Luzley has a mud bottom. 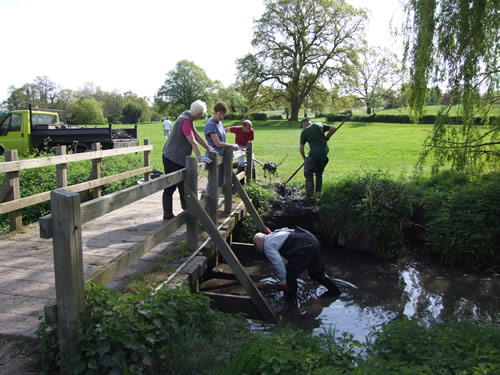 Jon, suitably clad in waders, led the team from the middle of the brook where he sank into the Luzley silt, and was soon busy raking out a tarpaulin and rotting hardboard, presumably from previous activities in the Fields. At the first bridge, Jon and Dave pulled out nine inches of willow root stock and accumulated debris. In total a whole truckload of material was removed. A sudden gush of water, brown silt turbulence and the Luzley was flowing again – once the silt settles we should have clear flow. 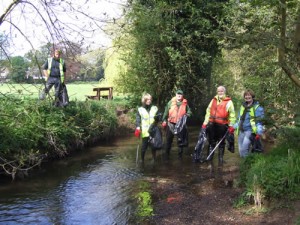 Then on to the Finham; a relatively easy job since it was cleared by us last Spring. It’s much improved since last year’s clogs with a clearly visible stone bottom, clear water and shoals of tiddlers. The willow that we pollarded last Spring has wands 2-3m in length, and bears flowers. Treecreepers are active along the banks of the two brooks, skipping up the trees in search of food. Tadpoles are wriggling by the Lake edges. And finally, hybrid goldfish are spawning in the Lake, especially down by the feeding boards by the Swimming Baths.

Since then we have managed to carry out a stream clearing session every spring so keep an eye out on the Activities page for a date some time around May.