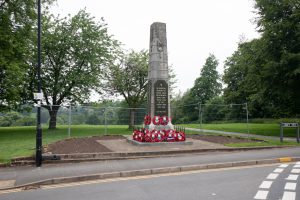 Kenilworth War memorial stands at the top of Abbey Fields at the junction of Forest Road, Abbey End and Abbey Hill.  The memorial was unveiled in 1922 and commemorates those men who died in World War I, World War II and the Korean War.   Details of those whom it commemorates and other details can be found at:

The immediate surround of the war memorial has required some maintenance and it has been agreed that the lighting will be upgraded to have three lamps instead of the current single lamp which has been the situation for the past years.

Work started in early June with the installation of framed wire barriers so that members of the public would not stray into the work area. Having completed this the slabs were lifted and cleaned and then the contractors waited for advice regarding the siting of the conduits so that the new electric cables could be installed in the correct positions. Having installed the conduits, the contractors (Tim, Olly and Alison) then re-laid the slabs. This time they were butted up to each other so that there were no gaps which needed grouting with cement.