Our first Plug Planting session was held on Saturday, 13th October 2012 when we planted 800 plants including Birds Foot Trefoil, Black Knapweed, Cowslip, Oxeye daisy, red clover, Ribwort Plantain and Selfheal. We had a good turnout of volunteers and the weather stayed dry for the majority of the time. The ground was reasonably soft as it had rained heavily earlier in the week. There was evidence of germinated plants in the sward so we should be all set for next year.

At our AGM on 18th July 2012 Jon Holmes explained how the Wildflower Meadow was progressing and what plug plants we would be putting in on 13th October 2012. These will include Black Napweed, Oxeye Daisy, Birdsfoot Trefoil, Ribworth Plantain, Cowslip and Red Clover as well as spreading some Yellow Rattle seeds. These will all be 9cm British grown plugs costing £350 for 500. We will just be planting about one third of the wildflower meadow area this year.

We held a talk on Creating the Wildflower Meadow led by Ron Hill and Jon Holmes of Warwick District Council at 7.30pm on Wednesday, 25th January 2012 at Jubilee House, Smalley Place, Kenilworth (the old Police Station). This was very well attended.

See below our plans for the Fields:

The site is to the right of the footpath from the War memorial down to the swimming Baths (see hatched area on map below). The area is approximately 10 ,000 square metres which will have mown pathways around and through the area. The ground is slightly acidic. Grasses and plantings have been selected that are suitable for the soil and slope. 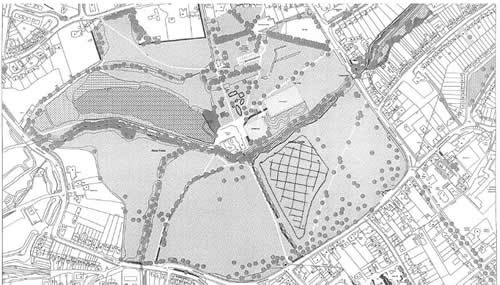 WDC will supervise all work which will be undertaken eiher by WDC contractors and/or FOAF volunteers. Expert advice has and will be given by Steven Falk and Jon Holmes of WDC, Ron Hill, Emorsgate Seed Suppliers and others as required.

This will be a three year project to establish the area with subsequent ongoing maintenance by WDC.

Year 1: 2011. Autumn scarification and clearance of debris and loose grass. Distribution of seed mixture at approximately 1.5 grammes per square metre over the whole area and lightly rolled. This work has now taken place.

Year 2: 2012. The area will be regularly mown throughout the summer by WDC. This will enable the seedlings to grow and bulk out and restrict the height of existing meadow grass to allow light to get to developing seeds. A sowing of yellow rattle will be made in the autumn. This annual plant is self-propagating, a good insect plant, and is used to reduce vigour in existing grass swards and enable new sowings to develop. Also in the Autumn additional plant plugs of flowers will be planted by FOAF members and public.

Year 3: 2013. WDC will mow in Spring if required and cut hay in late July/August. At this stage the meadow will be in early maturity. Further plug planting will be carried out by FOAF in the Autumn.

For following years the regime of early spring mowing, if required and cutting in late summer as hay crop will be carried out by WDC. The full range and variety of grass and flowers will develop in succeeding years. The meadow will improve as it matures with time, a legacy for people and wild life to enjoy.

The seeds that have been spread on the area so far include:

Year 2:  for Yellow Rattle seeds, plant plugs and their sowing we have budgeted £2,600.

Year 3: for Plant Plugs we anticipate another £700.

Future years WDC will manage the area as a traditional hay meadow at no cost to FOAF.

We have been fortunate to have obtained a grant from the Communities Forum Fund of up to £3,000 over three years. FOAF have sufficient funds to cover the balance; ie approximately two thirds of the total. Should all the CFF grant be taken up then FOAF will fund the extra amount.

The area has already been set apart by WDC as a low mow area and they are delighted that, with the help of FOAF, it will be improved to provide a wild flower meadow. Kenilworth Town Council has given unanimous approval to the project. English Heritage has also confirmed their approval.