In total, about 20 people arrived to enjoy this Bird walk. Some of whom were members of Friends of Abbey Fields whilst others were interested Kenilworth residents.

This year the weather was cool and cloudy and, when off the hard surfaces of the footpaths, it was quite wet underfoot.  Colin Potter, a local ornithologist, led the walk.  He explained at the outset that, because of the quite low cloud, this was more likely to be an opportunity to hear the birds rather than to see them. However, we were lucky in that we did get to see quite a few. He also told us that he had not yet seen many, if any, groups of Swallows, House Martins or Swifts so far, but there may be some over the lake.

We walked down to the brook and were able to hear a Robin, a Wren and a Goldcrest, a Great Tit and a Blue Tit. Colin explained that very often the call of a bird sounded like its name exemplifying the Wood Pigeon, of which we saw several, and the Collared Dove. Walking along past the tennis courts a Jackdaw flew over and then we stopped to observe a pair of Nuthatches at the top of a tree trunk. These birds have the amazing ability of being able to run down trees as well as up them. Close by we saw a number of Long Tailed Tits. These lovely birds sometimes share nests as well as taking advantage of some very early moth grubs which can emerge on warmer days during the winter.

When we arrived at the lake we were met by a Mute Swan, several Mallards and a Hybrid Duck. The last of these is the result of domesticated ducks having been released into places such as the lake and then breeding with the local mallards. Colin Potter explained that the Mute Swans could be identified by unique markings on their beaks, as well as the orange (Warwickshire) bands which have been put on their legs, and that some Mute Swans had been tracked to different locations as a result of these markings.  The splashes and ripples on the surface of the lake indicated that the resident carp were taking advantage of the fly larvae which were emerging. 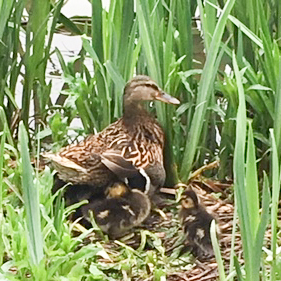 As we progressed round the lake we saw a female Mallard sheltering a brood of chicks under its wings and a Moorhen gliding along beside the reeds at the edge. A little further on Colin identified a common Whitethroat, a Blackcap and Chiffchaff and explained that these birds nest on the ground under the shelter of brambles and nettles, as do many other birds, which is why it is necessary to keep such areas if we want to maintain the variety of wild birds in Abbey Fields. Later he spotted or heard other birds including a Song Thrush, a Greenfinch, a Goldfinch, a Chaffinch, a Raven, a Magpie and in the distance a Swallow.   It was explained that in the spring the birds have to relearn their ‘songs’. They start out a bit scratchy, but over the weeks they develop in clarity and duration –all designed to make them more attractive for the breeding season.

As well as the lovely birds, we were able to see that spring has arrived in Abbey Fields and among the profusion of new plants we saw Himalayan Balsam, an unwanted problem weed, as well as Snakes Head Fritillaries, Cowslips, Forget-me-nots and Marsh Marigolds all in flower.

At the end of this interesting walk, Ojars Bartmanis, the chairman of Friends of Abbey Fields, thanked Colin Potter for leading the walk and his interesting and informative commentary.  Both he and Colin Potter suggested that if anyone wished to help with Bird Surveys in Abbey Fields they would be most welcome and should get in touch with us by sending your details to info@friendsofabbeyfields.org.uk